Protein bypass in dairy ruminants has been shown to increase milk production and protein levels in milk. Interest is more  pronounced in early lactation and in high production herds. However, a good balance of ration for these animals must necessarily pass through optimization of ruminal functioning. 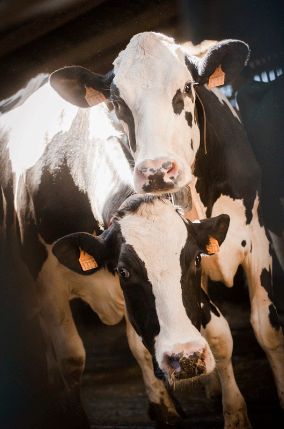 Although formalin treatment of cattle cake increases bypass and amino acids in the intestine, VERTAN is a product capable of effectively challenging these techniques, with sometimes better results.

Although formalin or other techniques work directly on meal proteins, VERTAN acts in the rumen on all proteins ingested by ruminants, including forage proteins. The efficacy of VERTAN is potentially on  twice as much protein compared to conventional techniques.

Two series of official tests at AgroParisTech, in France, were conducted to compare VERTAN with formalin-treated meals.

Extensive trials were also carried out on more than 70 farms, mostly equipped with milking robots and monitored by researchers over a period of more than 6 months, giving results comparable to or sometimes greater than formalin.

Since the filing of its international patent in 1999, VERTAN has replaced formalin treatment  in very large feed manufacturers in France and abroad. The loyalty of its users testifies to its effectiveness.